Shakespeare the Renaissance Week 1 2015: Elizabeth 1st and the theme of Love/Lurve in Shakespeare 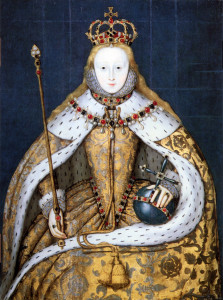 Elizabeth the First’s poem “On Monsieur’s Departure” shows well how literature of the Renaissance was so often deeply concerned with the inner workings of the human soul. The rich texture of the language, dramatising her conflicted nature in loving the French Duke of Anjou, draws the reader in to her effort to understand by describing what is going on inside: “I grieve and dare not show…. I love and yet am forced… I do, yet dare not say…. I am and not…. Since from myself another self I turned….” It is a very modern psychological language that shows how close she (and people in the Renaissance in general) were to our way of thinking, feeling, experiencing the world. Shakespeare’s characters are often very like the character depicted in this poem: appealing to something in their higher nature while in the same breath sinking to something lower: “Some gentler passion slide into my mind/ For I am soft and made of melting snow…. Or let me or(either) float or sink, be high or low…” As Anthony Burgess memorably said about Shakespeare he had a “talent which, more than any other that the world has seen, reconciles us to being human beings, unsatisfactory hybrids, not good enough for gods, and not good enough for animals.”

In A Midsummer Night’s Dream Shakespeare explores the way in which the complex, uncontrollable force of love can wreak havoc in people’s lives, how it can also bring a happy stabilising framework and how it can remain a bubbling unrequited aspect of human nature no matter what the external circumstances. In some ways Shakespeare sees it as the life force itself, that we have to live with, ride with and maybe tame…… let’s watch this force unfold in A Midsummer Night’s Dream… in As You Like It….. in Henry IV…….in The Tempest…….

Blog Questions for Week One

1/ Using Elizabeth 1 as a starting point, write a short poem that captures the internal complexity of your own emotional state in a relationship. Try out the texture of inner conflict that Elizabeth uses to “nail” the shifts in her own feeling.

2/ Write a shore paragraph of prose (illustrated with visual images if possible) that shows how love in the 21st century is no easier than it was in the 16th Century.

An important note about Blogging this semester: we want to create a real interactive community of bloggers in Shakespeare and the Renaissance. The only way to achieve this is to comment regularly, frequently on each other’s blogs. Take this task seriously and enjoy the challenge of giving and taking criticism and giving and listening to other ideas. Also, most importantly, post your name (+ a little bit about yourself), and your URL into the WordPress URL Forum Set up in LEO.